You were formerly the Senior Partner in a major international commercial law firm. What led you to open your own law firm in 2009?

Dr Dirk-Reiner MartensI was looking for a new challenge. My motivation was the desire to work in a smaller set up and above all to focus on my special practice areas of arbitration and sports law. My previous law firm afforded me the opportunity to gain experience in commercial law and company law. I have handled corporate acquisitions and mergers, argued and heard cases before international courts and arbitral tribunals, and led teams of lawyers in connection with managing the legal aspects of major transactions. But arbitration and sports law have always been my particular interest. I put together a small team and eventually decided to establish my own law firm with these young colleagues. I wanted to figure out how to set up a company to my liking with much younger colleagues and a strong team spirit. I don’t yet feel old enough to retire and spend my time just reading the newspaper and drinking cappuccinos. I enjoy my profession so much, I would miss it.

Arbitration and sports law – how do they fit together?

Dr Dirk-Reiner MartensFirst of all, arbitration today is a widespread and recognised method of settling commercial disputes that offers many advantages: briefer proceedings, reduced costs, confidentiality, procedural flexibility and easier international enforcement. Whilst it is true that not all of these supposed benefits of arbitration compared to litigation before the state courts apply to the same extent, generally speaking arbitration is an attractive alternative to conventional methods of conflict resolution, especially for disputes in an international context – and this applies to both business and sport, since at the professional level the latter is also very international. This is why I already started to focus on it very early on in my legal career.
In addition I was and am a passionate basketball player and thus this was an opportunity to combine my passion with my job. Sport has so many facets that are of legal relevance. Just think of the rules under the law of associations, the outsourcing of professional sports teams into capital companies, television distribution agreements and sponsorship agreements, players’ contracts, match-fixing, sports betting … for me this variety is what gives sports law its appeal. 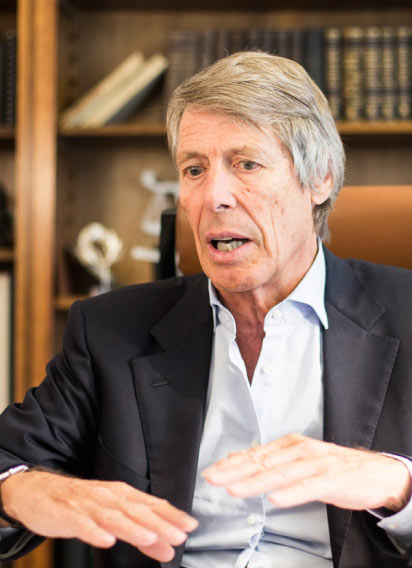 Dr Dirk-Reiner MartensThe subject matter of sports law is widely underestimated: very few know what this term means or are able to realise that it is an interdisciplinary subject that touches on almost all areas of law.
Sports law as we understand it encompasses an incredibly wide spectrum of legal problems, ranging from criminal to civil law, from tax law to company law, from the law of associations to antitrust law and many other branches.
I would say that in this field it is particularly important to be capable of reacting to challenges in a large number of areas of law swiftly and spontaneously.

In today’s legal market isn’t it very risky for a law firm to have a specialisation? By contrast large law firms are tending to endeavour to offer their clients a full service across all areas of law…

Dr Dirk-Reiner MartensIn the field of sports law the number of potential clients is of course much smaller than in so-called commercial law. However, since sports law is an interdisciplinary subject that touches on virtually all areas of law this kind of specialisation goes hand in hand with hugely diverse legal issues, which is very appealing. It goes without saying that meanwhile the large law firms also recognise the importance of the legal aspects of sport and can of course fully cover the commercial side of sports law.
But what many of them lack is an in-depth knowledge of the specific characteristics of sport. You can’t really give comprehensive advice unless you understand and have experienced the idiosyncrasies of the sporting environment. We have this in-depth knowledge. Moreover we have spent decades building up a network of contacts via which we can guarantee to provide full service advice. For example we maintain business relationships with consultants, tax advisors, and experts in trade mark law and insurance around the world.

Dr Dirk-Reiner MartensMy oldest client, an international sports federation in Switzerland, recently commissioned me to provide legal assistance with implementing a new system of governance for the federation. When implementing it we had to take account of commercial law issues on five continents plus the tax laws and laws on non-profit organisations in all five. In projects like this a large part of our work includes acting as a point of contact and manager for the stakeholders involved, such as our client and its corporate advisors. Knowledge of foreign languages and cultural backgrounds is also very important.

Can you transfer some kinds of experience directly from sports law to commercial law?

Dr Dirk-Reiner MartensAn understanding of other cultures and languages is an asset that can be transferred directly to commercial matters. In my work as an arbitrator I realise time and time again that you can’t just confine yourself to interpreting the contract and the legal provisions. It is important to be familiar with the relevant market and its practices to be able to make a decision.

How much does the work of an arbitrator differ from that of a judge in a national court?

Dr Dirk-Reiner MartensI have served as an arbitrator in well over 180 cases in the last 15 years. The key skill of an arbitrator is to bring proceedings to a speedy and efficient conclusion. Legal knowledge does of course play an essential role, but in major commercial arbitration proceedings the legal issues are thrashed out from every angle by the parties’ respective lawyers with the result that it is only left for the arbitrator to decide which of the various opinions to follow.
Compared to the judge of a state court an arbitrator has a much greater degree of flexibility as to how to conduct the proceedings. Even though most arbitration proceedings follow rules of arbitration there is still scope for creativity and innovative solutions on the part of the arbitrator.

You created the Basketball Arbitral Tribunal (BAT), which is administered by your law firm and which, with 150 new cases each year, is the second largest sports arbitral tribunal in the world.

Dr Dirk-Reiner MartensThe trigger for setting up the BAT Arbitral Tribunal, which at that time was still called the “FIBA Arbitral Tribunal”, was a meeting with players’ agents in 2007. The agents were looking for a dispute settlement mechanism that compelled the parties to players’ contracts to adhere to these contracts. This is because having recourse to the national courts meant very protracted and costly proceedings for the parties. To overcome this problem we had to explore new avenues. Today the administration of the Basketball Arbitral Tribunal is largely computer-based, works only with a sole arbitrator and does not decide on the basis of a national legal system, but ex aequo et bono, i.e. on the basis of fairness and justice. When we created the BAT, there were hardly paradigms in the world of sports tribunals for the “ex aequo et bono” concept itself, yet this was largely responsible for the BAT’s resounding success. Rarely parties may not be satisfied with the outcome of arbitration proceedings at the BAT, nevertheless it is widely recognised that the BAT has revolutionised the entire players’ market in Europe and beyond, thereby creating a genuine lex sportiva.

The overwhelming success of the BAT has even prompted us to create a commercial arbitral tribunal modelled along the lines of the BAT, the Court of Innovative Arbitration (COIA).

What are the benefits of modelling a commercial arbitral tribunal along the lines of the BAT?

You organise regular client events. But that is rather unusual for a law firm of your size …

Dr Dirk-Reiner MartensAt the start of my professional career I learnt from the senior partner that as a lawyer you have to concentrate on doing a sound job and that high-quality work is what generates business for the firm. This is no longer the case today. Even in the niche market of sports law and dispute resolution you can no longer get by without active marketing. Another reason for organising client events, however, is to pass on know-how to our contacts and to offer a platform for networking. The market is fast-moving and we too are interested in having dialogue with our contacts so as to be able to offer the best service possible and to get inspiration for new projects. We have done this very successfully in past years, for example in the case of the Anti-Doping Forum in Berlin in 2009 or again in 2012 in the case of the seminar “Dispute in Sport” in the Allianz Arena in Munich. Moreover we will continue to offer these types of events. In addition we also run workshops abroad, such as the one we recently held for the Football Federation of Azerbaijan in Baku.